{Road Trip}
We made a very last minute trip West across Florida to visit with my Aunt and family who were in town visiting from Eastern Canada. Being that it was last minute we didn’t have a lot of time to plan and prepare. With a quick look at hotels available I began to realize that there wasn’t much available and it was a little pricey. I found a new property that Marriott opened under their Fairfield Inn brand and it was just 3 weeks old! Reasonably priced considering the location to the beach and the amenities available we felt it was a good deal, especially since we booked it for same-day arrival.

My next google search was for a place to grab dinner knowing once we made the 4 hour drive we would all be starving. Closest to the hotel (walking distance) was a place called Palm Pavilion and with a 4-star rating and over 430+ reviews, I figured it would be a good choice.

The drive wasn’t terrible but it was much longer than I had really anticipated. We got stuck in traffic just outside of Tampa and it added an extra 40 minutes onto our already long drive. My suggestion to anyone making the drive would be to plan it outside of evening rush hour traffic and to keep your stress levels low.

Arriving to the Clearwater Beach area we passed the Clearwater Aquarium where Hope and Winter the dolphins reside. The Hollywood film “Dolphin Tale 1 & 2” were filmed there and feature the dolphins still living at the aquarium. I had made a mental note of the location so that if all went well in the morning we could plan a quick visit with the kids.

I was pretty impressed with the drive over the Clearwater Causeway, it was really pretty and the water was beautiful. The first thing we all noticed driving into the main strip area was the stores and shopping. There seemed to be a store for everything and a great place to enjoy an evening strolling the beachside with family or friends.

Our hotel was about 1.5 miles from the causeway and was directly across from the beach just as described online. The only downside to this property was that there was no self-parking, only valet options at an additional $20/night. The young man at valet was really friendly and welcomed us to the hotel and area. He told us they offered complimentary shuttle with their 6 passenger golf cart to the beach, Palm Pavilion and Frenchie’s on the Beach restaurants. That was a nice perk although the hotel was across the street and a nice walk but I could see families with young children wanting to use the shuttle service.

After checking in we headed over to the valet and jumped onto the shuttle and was taken to the Palm Pavilion restaurant as we had planned before leaving the house earlier. We asked the shuttle drive “Edwin” what he recommended to eat and he actually suggested we eat at Frenchie’s but seeing that we were starving and their average wait time being 45 minutes – 1hr we would never make it through the wait time. Emma gets “HANGRY” big time! 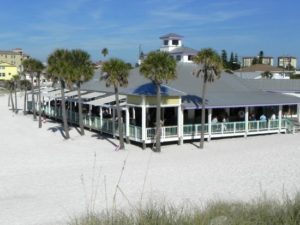 Palm Pavilion was right on the beach and seems to offer live music each night of the week. A generous outside bar seating area and large patio overlooking the ocean and beach for dining, where we were seated. It was busy for a Thursday night and our server was a friendly young man named “CT”. I had no clue what I wanted to eat and I made the terrible mistake of just picking what sounded good from the menu rather than asking what they recommend or their signature dish.

Chinese Chicken Salad with Peanut Butter Dressing and a Shrimp Taco. Pretty basic, right?
Well John ordered the exact items with the exception of the shrimp taco, he had the mahi taco. Big mistake! The salad arrived and it was bagged salad thrown in a bowl and topped with canned mandarin oranges and two tiny grape tomatoes. The chicken listed on the menu was supposedly Teriyaki seasoned… when it arrived, it was a huge chunk of sliced deli meat! I don’t know if I was just shocked that they actually served a slab of deli meat on my salad or that perhaps I was expecting an actual breast of chicken, or diced chicken… something other than what arrived. I couldn’t eat it although I tried. John managed to choke his down but was not enjoying his dinner at all. The kids didn’t seem to complain about their food, pretty basic kids meal choices like burger, chicken tenders and fries.

A fairly expensive dinner considering the quality of the food and just “okay” service I probably wouldn’t recommend this restaurant for anything other than drinks on the beach.

We decided to walk around for a little and headed down the street towards the stores, which were all for the most part open and busy about 9:30pm on a Thursday evening. Not something we are use to in our part of Palm Beach. I had promised the kids dessert because I wasn’t giving Palm Pavilion another penny of our money. We had seen several families pass us and they had ice creams and milkshakes all from a place that had “Ice and Cream Creamery” written on the side of the cups.

I thought that would be a good sign of a place to grab something sweet. We found it about 4 blocks away and it had a huge line out the door and down the sidewalk!!! What was this place we all thought. A big sign on the window read “$3 hand spun milkshakes” Well, the price was right and the line said it must be good. We waited about 10 minutes and finally made our way inside. 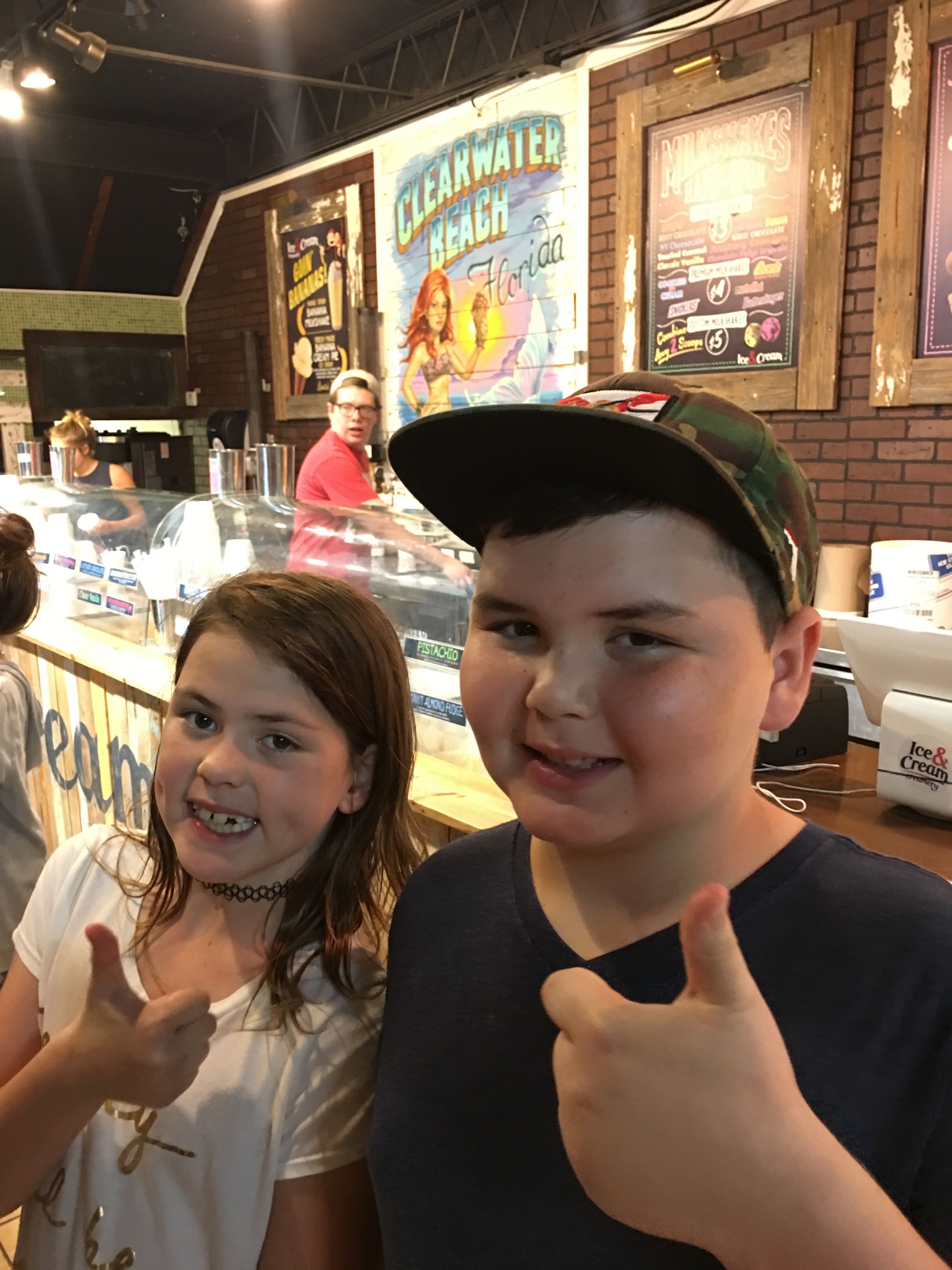 A big success, the kids ordered a Nutella milkshake and Smurf cone and we had a banana milkshake and my boring vanilla. They were pretty good, a good treat for the $3 each!

We headed back to the hotel on foot while enjoying our shakes and even stumbled across a nice little cigar store with comfy outdoor seating. John would have stayed and enjoyed the basketball game but we were all pretty tired at that point. 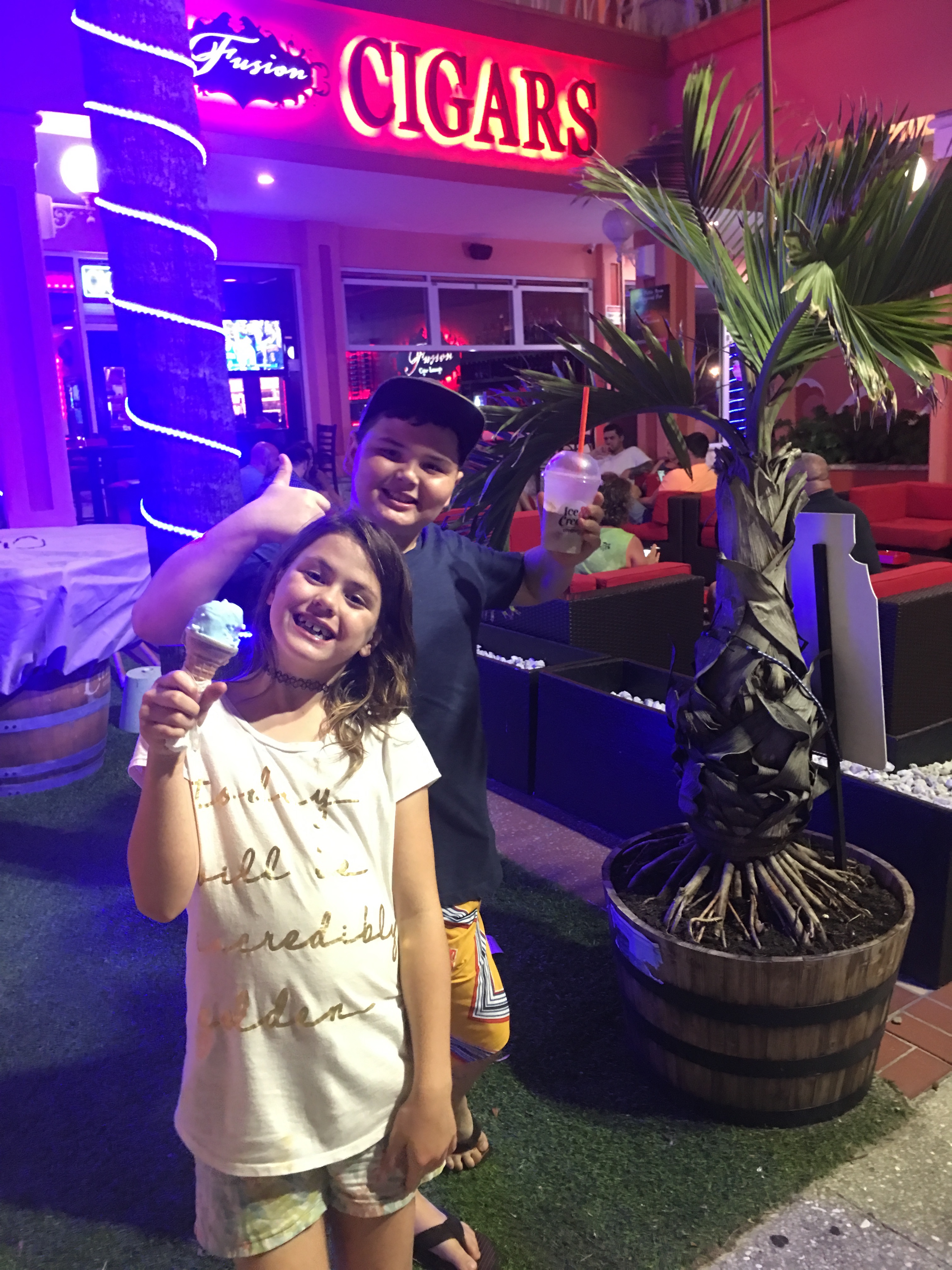 We had a night of heavy rain and it made for a cloudy overcast morning. Our hotel stay came with complimentary hot breakfast in the lobby so we enjoyed a nice start to the day with a good selection of typical breakfast items. As a family of 4 this complimentary breakfast is perfect, that would have easily cost us $50 or more to eat out.

We met with my family at our hotel pool and the kids enjoyed playing while we sat on the deck and watched. There was plenty of seating for both relaxing and sun tanning, it was a great spot although the pool overlooked a neighboring parking lot for rental condos across the street. Perhaps once the trees fill in over time it will provide a little more privacy for hotel guests. Check out time for the hotel was 12 noon so that was convenient if you wanted to look around or have a lazy morning.

Being a short trip and having limited time to visit, we left the hotel and parked at the main beach area and wandered around a little with the kids. We looked in Ron Jon Surf Shop and the kids got a t-shirt and a few small things and we then agreed we would let them run around at the big park on the beach before getting back in the car. 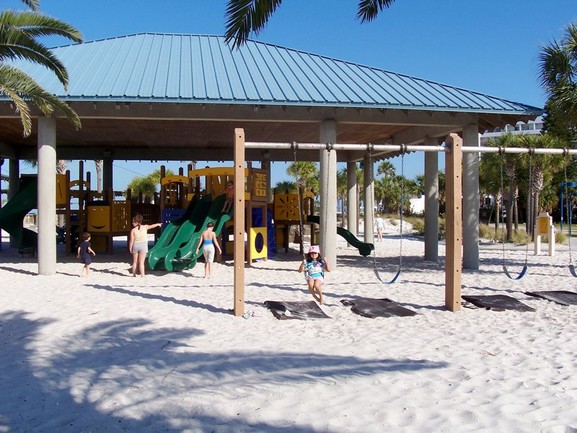 Overall, we enjoyed our very quick trip to Clearwater Beach and would definitely return again with a little more time to explore the area. I think the kids enjoyed the day too but it was a REALLY long drive. I certainly am not looking forward to that again. 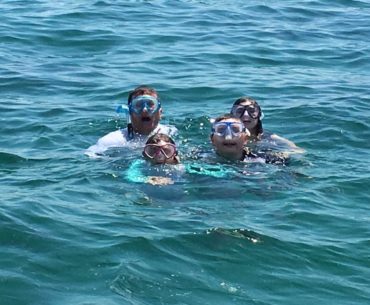 Islamorada, Florida  What a TRIP! Our recent visit to Islamorada in the Florida Keys was such a huge success. We were all very sad…